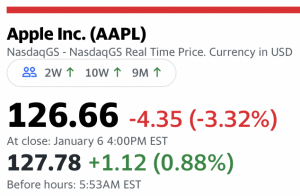 Global markets and U.S. stock futures rose Thursday as investors looked past the political unrest to focus instead on prospects for higher government spending…

Futures on the Nasdaq-100 Index gained 0.7%, suggesting that giant technology stocks may recoup some of their losses. The sector took a beating Wednesday when investors pushed into other stocks that are more dependent on economic growth.

Investor sentiment was boosted by Democrat Jon Ossoff’s victory in the second of two Senate runoff races, which was called shortly after U.S. markets closed Wednesday. The two Georgia seats handed Democrats control of the Senate, raising the prospect of additional stimulus for the U.S. economy after President-elect Joe Biden takes office.

“The expectation is now we’ve avoided a gridlock, and more fiscal support will be available to the economy through this coming year, rather than less,” said Christopher Smart, chief global strategist at Barings.

Investors were largely unmoved Wednesday by violent scenes in Washington, where a mob of Mr. Trump’s supporters stormed the Capitol in an attempt to derail the ratification of Mr. Biden’s victory.

My take: What a day.