Apple shares and lumber futures are soaring: The pros and cons

From the James Mackintosh's "Fed’s Easy Money Pumps Up Winners Like Apple and Housing" ($) in Friday's Wall Street Journal: 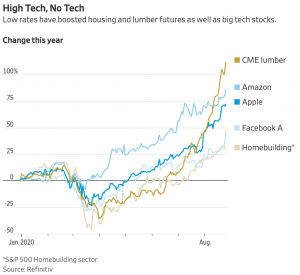 Winning investments this year include technology stocks, gold and, umm, lumber. Yes, lumber: pieces of wood may not be as glitzy as Apple or bullion. But like them, lumber and other assets linked to home construction have been big beneficiaries of the Federal Reserve. Helping home-building is one obvious way to help the economy.

Helping Apple shareholders, not so much. Yet, even the Fed’s contribution to soaring tech stocks should trickle through eventually, in a convoluted way. That’s lucky, because the Fed’s new way of thinking laid out by Chairman Jerome Powell on Thursday suggests easy money is here for the long run...

Consider Apple. Helping a $2 trillion company issue low-rate bonds to buy back its shares is hardly a national priority, but is one of the side effects of Fed action. It isn’t only a side effect, though. The benefit should, in a roundabout way, eventually end up helping the real economy.

Since the pandemic began, Apple has raised billions of dollars in bonds at low rates, most recently paying 1.25% on 10-year debt, in part to finance buybacks. It can raise the money more cheaply thanks both to the Fed’s rate cuts and Fed support of the corporate bond market, boosting Apple’s profits and allowing it to do more buybacks (assuming Apple’s expansion plans are already fully financed).

The buybacks put some of that money into the hands of an Apple shareholder, who might invest it elsewhere, save it or spend it. Money spent is simple, helping the economy. Money saved in a bank is simple too, hindering growth. If the money is reinvested, it’s more complex. It goes into the pocket of the seller of the shares, who then faces the same choice. If everyone keeps reinvesting, prices get pushed up until eventually someone decides to spend the money, or a company decides to issue stock. That, in turn, could be to finance a new project or recapitalize a struggling business, or—more likely—to allow investors in a private company to get out via an IPO (then starting the process all over again as they are left with cash and the choice to spend or reinvest).

Investor preferences get in the way of this process, because investors want to buy the winners. So the Fed’s easy money pumps up the stock prices of the winners, but does little for the companies that investors can see are suffering, such as airlines, clothing stores and anything connected to tourism.

My take: Trickle-down economics, according to the Wall Street Journal, would work so much better if Apple—and Apple shareholders—didn't keep pouring money back into shares of Apple. Who knew?