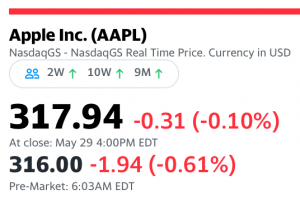 U.S. stock futures slipped on Monday while most global markets advanced, with a report that China was pausing agricultural product purchases calling into question the apparent easing in tensions between the U.S. and China.

Stocks in Asia rallied in their first chance to react to President Donald Trump’s Friday news conference on China, in which he took no new steps to punish the world’s second-largest economy over its new national security law for Hong Kong.

Those gains came ahead of a Bloomberg News report saying soybean and pork products orders were canceled by state-run companies.

That news sent U.S. stock futures lower and moved European stocks off their highest levels of the day.

My take: Going every which way this morning. 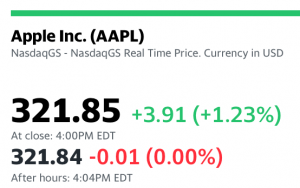 US equities climbed on Monday as investors' hopes for a swift economic rebound offset nationwide protests and escalating tensions between the US and China.

Major indexes initially slumped after Chinese government officials ordered companies to halt imports of US farm products. The purchases were a key component in the two countries' phase-one trade deal. The import pause fueled new worries that the economic powers could resume their tit-for-tat trade conflict after a months-long hiatus.

Stocks turned positive later in the morning as investors continued to bet on a smooth reopening. US manufacturing data from the Institute of Supply Management showed the industry stabilizing after a four-month plunge.