From a note to clients by analyst Katy Huberty that landed on my desktop Wednesday:

We believe the stock can continue to work from here. Despite the 40%+ rally from the lows following the December quarter pre-announcement on Jan. 2nd, we see a number of reasons to remain bullish.

First, in our view, investors still don't fully appreciate the strength of Apple's platform with iOS users more engaged with mobile services and spending 10x Android users on mobile apps. This skepticism, combined with the lack of details on timing and pricing of recently launched services, led the Street to leave revenue forecasts largely unchanged despite Apple nearly doubling the number of Services offered this year...

Second, iPhone can become a contributor to multiple expansion again. We estimate iPhone replacement cycles lengthened to >3 years in the December quarter, and will hit ~4 years by fiscal year end, relatively on par with the mature PC market, which reflects a ceiling, in our view. Plus, iPhone data points stabilized early in the March quarter with a positive inflection in China active installed base share and Taiwan supplier monthly sales improving at March quarter end. Additionally, the recent Qualcomm settlement increases the likelihood of a 5G iPhone launch in 2020, which the stock typically starts pricing in 6-9 months early.

My take: Huberty is a long-time bull on Apple who stuck with her Overweight rating and $200+ price target even in the dark days of January, when the stock fell through $150.  Which is more than you can say for the institutional investors represented in her Exhibit 4: 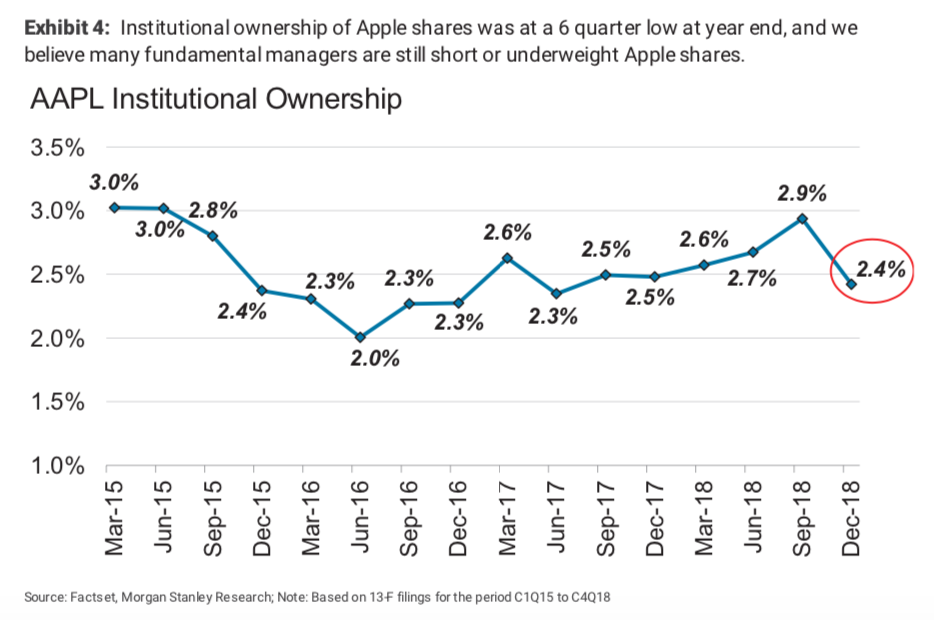