Canalys: In world’s fourth largest country, Apple has nowhere to go but up

Indonesia was the brightest spot in Asia Pacific in 2018, but iPhone didn’t make the top five.

From “Samsung leads in Indonesian smartphones as market surges ahead to close 2018 up 17.1%,” released by Canalys Research Friday morning: 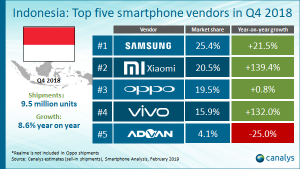 Indonesia was the brightest spot in Asia Pacific’s smartphone market, with shipments reaching a record high of 38 million in 2018, up 17.1% on 2017…

Competition among vendors has increased dramatically, with the top five now commanding more than 80% of the market, against 65% a year ago. “Indonesia is truly a mobile-first market,” added Doshi. “The sheer size of its app-driven economy underlines the increasing importance of smartphones and will attract heavy investment from software and device vendors alike, encouraging new companies to join the fray.”

Big international names, such as Huawei and Apple, are putting the country high up in their long-term expansion plans. As the market grows, smaller and local vendors are likely to suffer further as they try to bear the increasing cost of marketing and R&D while pricing competition from the top players gets stronger. (emphasis mine)

My take: Good to know that Apple is paying attention to Indonesia. It’s a big country. I had to look up the population: 269 million at last count, nearly Japan, Germany and France combined. Samsung dominates the market with the Galaxy J series, mid-tier Androids that retail in the U.S. for about $170. Apple doesn’t want to compete with that. But it may not be too late to offer some aspirational alternatives. The nearest Apple Store is in Thailand.