Canalys: U.S. is now No. 3 smartphone market after China and India

From a report that landed on my desktop Wednesday:

Worldwide smartphone shipments fell by 7% in Q3 2018, a fourth consecutive quarter of decline. This was also the worst third quarter performance since 2015. China’s smartphone market had another disappointing quarter, only shipping 100.6 million units, a year-on-year decline of 15.2% and sequential decline of 2.9%. India overtook the US this quarter to be the second largest market, though both countries were hit by weaker seasonal performance compared with last year. Seven of the top 10 markets recorded year-on-year declines, caused by lengthening smartphone replacement cycles, worsening international trading conditions and competition from major Chinese vendors...

At the vendor level, Samsung was the only company to post a year-on-year decline, of 14%, which pushed its market share down to 20.4% from 22.0% in Q3 2017.  Huawei took second place ahead of Apple, shipping 52 million units after growing 33% year on year. Apple grew by just 0.4%, shipping 47 million units. Xiaomi and Oppo rounded out the top five, shipping 33 million and 31 million units respectively. All Chinese vendors combined now account for 52% of the worldwide smartphone market, their highest share in history. 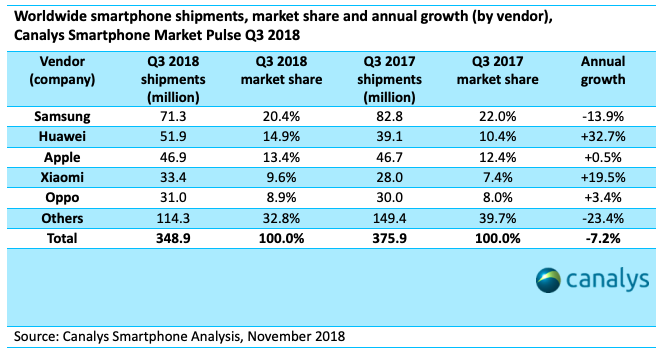 My take: They're still going to estimate unit shares, no matter what Apple does.