AppleInsider is betting on the Steve Jobs Theater, Thursday, Oct. 25.

From William Gallagher's When to expect Apple's October event and what we're expecting to see:

Given that we're so keen on hard evidence and given that October 2018 is proving to be an unusually tricky month for Apple to have an event all things considered, still we're going to call it.

Unless Apple just decides to email out a press release and be done with it, we say there'll be an event on Thursday October 25. It'll be at the Steve Jobs Theater and Tim Cook will announce incredible pre-order figures for the iPhone XR.

It will concentrate on the iPad Pro and pre-orders for those will be announced for the end of the month with shipping in November. We're less sold on new Macs at the release, though.

This fits in with everything else in the month and it gets Apple the chance to boast about iPhone XR sales. It also lets them make a splash with a big iPad announcement without then immediately overloading those 747s. And yet it still gives Apple just about the longest run-up to Christmas possible.

Consequently we're pretty sure. We'd even say that we'd put money on this being the right date, but on the one hand we're not sufficiently certain and on the other we want to save that money in case there's a new iMac.

Read Gallagher's thinking here, which is summarized in his calendar below: 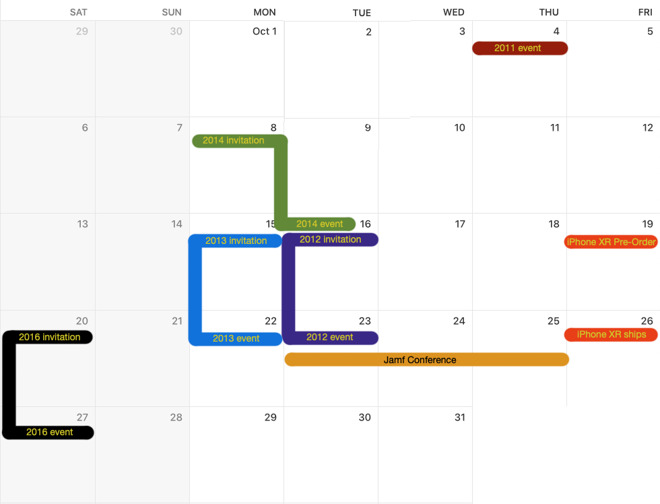 My take: Unless there is a great new MacBook, Apple is going to email it in.