How many Watches did Apple sell last quarter?

Nobody outside Apple really knows how many Watches the company sells each quarter. Tim Cook resolved early on—for competitive reasons, he says—to keep those sales numbers close to his chest.

That hasn’t stopped some of the braver analysts from making educated guesses.

I’ve heard from 15 so far this quarter—nine Wall Street professionals and six independents. With estimates ranging from 2 million to 4 million, there isn’t what you would call a consensus. There is, however, a numerical average: about 2.8 million, nearly half a million more than last year.

Plotting the average estimates, this is what the last seven quarters look like:

And here are the same seven quarters as estimated by Neil Cybart, winner of last quarter’s Earnings Smackdown:

“It is important to point out,” wrote Cybert in Tuesday’s Above Avalon post, “that Apple Watch sales likely bottomed in the 2Q16 to 3Q16 timeframe (right before WWDC 2016). The overall tone in the marketplace was quite negative during this period. This situation is likely giving the product category an extra boost of sales growth strength as year-over-year comparisons were favorable.” 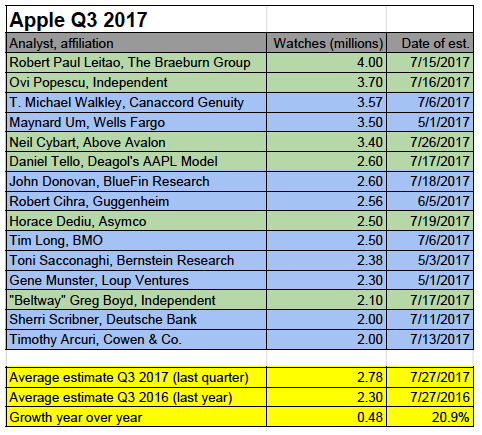 Nobody expects Apple to release a unit sales number when it reports its quarterly results next Tuesday, Aug. 1. But the size of its “Other revenue” category, where the company buries Watch sales, may tell us something about who was closest to the mark. I’ll be monitoring the earnings call, and you can too. Click here.