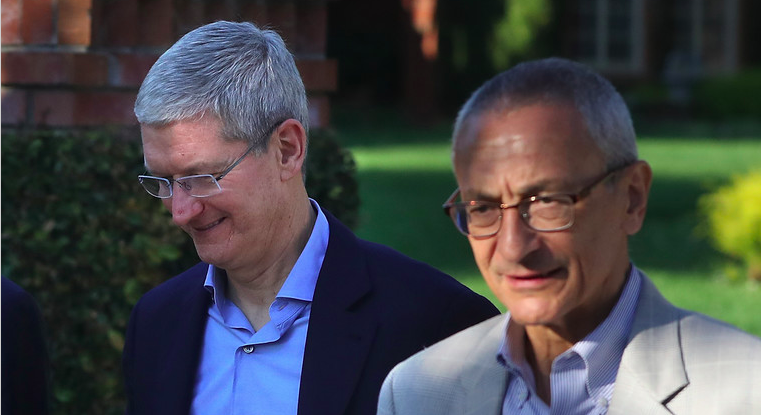 “He’s supportive, but new to this so I think we shouldn’t come on too strong.”

More than a year before Tim Cook thrust himself into the 2016 Presidential campaign—snubbing the Republican convention that nominated Donald Trump and hosting a matched pair of Silicon Valley fundraisers for Paul Ryan and Hillary Clinton—the CEO of Apple held a secret one-on-one meeting with Clinton campaign chairman and media pointman John Podesta, Wikileaks revealed last week.

The text of the e-mail chain, reformatted for clarity:

I heard from Lindsay that you are visiting Tim Cook on Monday. I would love to (kill to) join you if appropriate. However, if better smaller, no problem at all. Just wanted to share that Ill be in town all Monday since we have our Erika event on Monday night.

Tim’s office requested a 1:1 meeting today, which was a nice way of saying “no staff”.   I think this is one we should proceed cautiously. He’s supportive but new to this so I think we shouldn’t come on too strong.

Steph, thanks for circling back, see you tomorrow night.

Understood, thanks for getting back to me!  See you at Erika’s house!

The subject of the meeting is not discussed in this exchange, but a briefing Rottenberg supplied Podesta touched on what were the Valley’ hot topics that summer:

To see how the Clinton campaign framed the issues, see Rottenberg’s briefing memo here. Her characterization of Clinton’s e-mail problems (“smacks of acting above the law”) made news last week.