Apple’s ‘challenging’ quarter: What the analysts are saying

Excerpts from the notes we’ve seen.

More as they come in.

Tim Long, BMO: Units Crack Again; Lowering Estimates, Price Target on Big iPhone Miss. The feared big unit miss that did not happen in December or March is hitting Apple in June. We now have units of 38 million for June, a miss of six million, half of which can be explained by channel inventory reduction. Regardless, we are taking a more cautious view on units since the replacement rate seems to be extending faster than we had modeled. The 80% growth in installed base for iPhones over the last two years is better than we had modeled, though our 50%+ estimate did not capture used phones. Our overall thesis is unchanged. Reiterate Outperform. Cut price target to $117 from $130.

Katy Huberty, Morgan Stanley: iPhone Trough Pushed Out a Quarter. Mainland China iPhone end demand only declined 5% Y/Y despite a very tough comparison but Hong Kong was weak due to HK$ strength. Emerging market in general continues to be weak while Japan is doing better and Europe actually saw iPhone unit growth Y/Y. In addition, iPhone 6s upgrades are tracking slightly ahead of the 5s but significantly lower than 6. Net, this is causing Apple to lower channel inventory in both the March and June quarters. Services was the bright spot (+20% Y/Y vs. our estimate +15%) driven by App Store and Music. App Store revenue growing 35% Y/Y speaks to Apple’s ability to monetize the 1B+ device installed base especially as the lengthening upgrade cycle lowers device sales. Reiterate Outperform. $120.

Tavis McCourt, Raymond James. This Is What It Sounds Like When Bulls Cry. The company’s performance and June quarter guidance were weaker than anticipated due to continued sluggish sell through of iPhone 6S/Plus relative to expectations. Apple’s earnings report highlights the maturing smartphone market in developed countries and the continued iPhone 6/6 Plus hangover that has created some materially difficult comps for the company. We expect the shares to remain range-bound until top-line growth trends stabilize. Maintain Market Perform. Price target: NM.

Mark Moskowitz, Barclays: A Cold Rain – Apple Slips as Hope Rally Unravels. We expect shares of Apple to be under pressure near term. We had been concerned the stock’s recent “hope rally” overlooked the potential of more air pockets in the model, due to tenuous smartphone demand. Reality set in on Tuesday. Missing our recently lowered estimates, Mar-Q results and Jun-Q outlook upended any notion of the model bottoming. The silver lining is any near-term downdraft in Apple’s stock could grab the attention of large long-only funds that trimmed positions in late 2015, early 2016. Overweight. Price target cut to $121 from $131.

Gene Munster, Piper Jaffray: Growth Question Remains. While there were few bright spots in Apple’s Mar-16 report and Jun-16 guide, we believe shares of AAPL will rebound in 2016 as we expect iPhone to return to growth in Dec-16 (5% y/y), Mar-17 (18% y/y), and Jun-17 (19% y/y) driven by iPhone 7. While iPhone has been a disappointment over the past two quarters, there is a high probability that our revised numbers are achievable comparing the iPhone 6 cycle to iPhone 7 and its inherent upgrade base… We believe Apple is experimenting with a car (Project Titan) as well with virtual and mixed reality. While we believe VR/MR is the future of screens, it will likely be directly cannibalistic to iPhone. Therefore, the best candidate to significantly move the needle from where we are today over the next decade is the car, but we note that neither project is likely to change the question about long-term growth over the next few quarters. Reiterate Overweight. Cut price target to $153 from $172.

Amit Daryanani, RBC: Make Apple Great Again? The June-qtr guide was exceptionally disappointing but we think valuation provides support in mid 90’s near- term but for AAPL to sustain multiple expansion investors need to get comfort regarding iPhone 7 being a game changer and enabler of revenue acceleration. The big negatives from the EPS call were: 1) June-qtr guide down is material at 15% y/y decline, 2) Mix is a headwind: AAPL is seeing better uptick in low-margin/low-ASP iPhone SE while the high-end iPhone 6s/6s+ are both performing below plan, 3) China: Greater china revenues down 26% y/y though adjusted for a few factors its down 11% and 4) Gross-margins: AAPL expects gross-margins to decline by ~160bps q/q to 37.8%, while some of this is attributed to deleverage, the bulk of it reflects mix headwinds.  Maintain Outperform. Cut price target to $120 from $130.

Abhey Lamba, Mizuho: Results Support Bear View; We Remain Positive Based on Fundamental Value of the Franchise. While F2Q16 was a little better than feared, we are concerned about the continued pressure on revenues and margins. We believe either revenue or margin forecast should have been higher. The guidance clearly supports the bear argument that iPhone upgrade cycles are elongating and margins are impaired in the l-t. Additionally, given F3Q16 outlook, it is hard to see iPhone units accelerate to a level where they can grow in CY16. F3Q16 forecast also supports the view that C4Q16 shipments could decline Y/Y… Clearly, we are disappointed by the guidance but we would like to refer back to our upgrade note from January where we looked at Apple as a recurring revenue company with a loyal installed base that is likely to keep purchasing its products over time. Reiterate Buy. $120.

Timothy Arcuri, Cowan: The Final Cut Ahead of 7 “Bridge.” While optically hard to defend and maybe range-bound near-term, our call here is unchanged. We are aggressive buyers <$100 and feel the market will look back on this as the last estimate cut ahead of a little better than expected iPhone 7 cycle providing a bridge to a new “cycle of innovation” with OLED in ’17. Reiterate Outperform. Cut target to $125 from $135.

Walter Piecyk, BTIG: Cutting Estimates and Target Again. We are cutting Apple estimates further following the FQ3 guidance provided on tonight’s call. We recently cut estimates over our concerns about a lengthening product cycle so our iPhone unit estimates will remain largely unchanged.  However, we are cutting our FY 2017 EPS estimate by $1.02 to $8.55 based on lower ASP assumptions for the iPhone and lower operating margin assumptions. We believe the stock could open trading at more than a 15% discount to this new target tomorrow and will therefore maintain our Buy. Cut price target to $115 from $130.

Kulbinder Garcha, Credit Suisse: A setback creates an opportunity. We specifically note weaker guidance, and lower our June revenue estimate to $41.9bn… Given high retention, a superior ecosystem, and a multi-product compute advantage, we believe [free cash flow] of ~$67bn should be sustainable long term. Reiterate Outperform and $150.

Ben Thompson, Stratechery: Apple’s Run. Apple, though, has been a lot less accurate for the last five quarters: the iPhone 6 sold better than they expected in nearly every quarter, and now the iPhone 6S is selling worse (note the Maestri forecast errors); along similar lines, Apple seems to have underestimated iPhone SE demand to a significant degree. Ultimately, while I think Apple still has the advantage when it comes selling people their second (or third or nth) smartphones, what I think we are seeing is that it’s a lot more difficult to determine when exactly that sale will occur, and Apple itself is only now coming to grips with that.

Neil Cybart, Above Avalon: Pretty Brutal. When diagnosing Apple’s primary problem, I don’t think we should point at faulty business models or internal issues such as software or services. Apple’s problem is structural in nature. The broader smartphone, tablet, and wearables markets are showing numerous cracks and problems. The tablet market continues to be a disaster (more on that shortly). The smartphone market is slowing, catching quite a few people off guard. We can say “India” time and time again as the source of future smartphone growth, but it may just not be enough to offset what is happening in the rest of the world. Lastly, the wearables market is turning out to be the Apple Watch market with more measured growth and adoption trends. 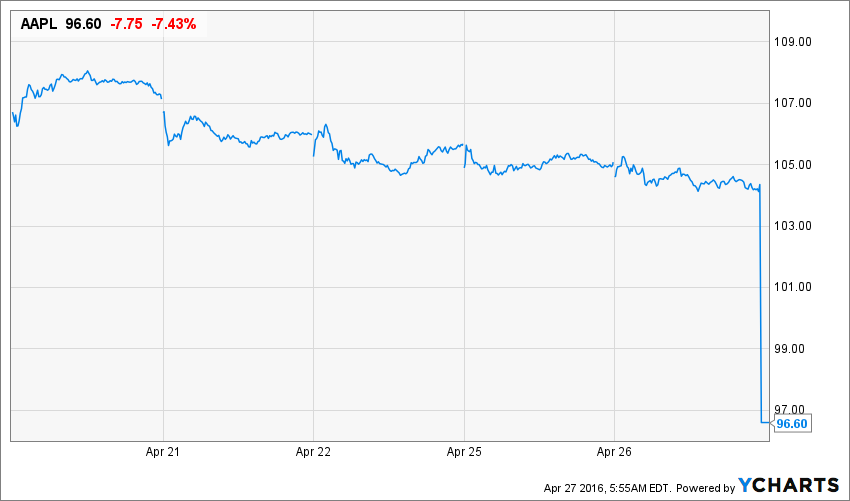