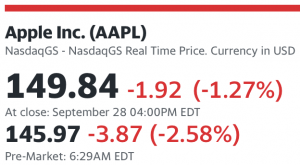 Stock futures slumped Thursday, putting the major averages on track to give back some of the sharp gains seen in the previous session.

The moves followed a broad rally for stocks a day earlier, as the Bank of England said it would purchase bonds in an effort to help steady its financial markets and the cratering British pound. Sterling has stooped to record lows against the U.S. dollar in recent days.

It marked a stark shift from the aggressive tightening campaign many global central banks have undertaken to cope with surging inflation.

The Dow on Wednesday gained or 1.9%, while the S&P 500 rose nearly 2% after hitting a new bear market low on Tuesday. Both indexes snapped six-day losing streaks.

As stocks rose and the BOE shared its bond-buying plan, the yield on the benchmark 10-year Treasury note dropped the most since 2020 after briefly topping 4%.

“If the market had a negative sign in front of it today, and not a positive sign, it wouldn’t surprise me,” said Liz Ann Sonders, Charles Schwab’s chief investment strategist. “The market’s going to do what it does on any single given day. You can attempt to sort of point to what might have sat behind it, but that’s just a parlor game. A lot of it is the market got really oversold and buyers stepped in.”

Charts: Yahoo!Finance sees a neutral commodity-channel-index pattern. Max pain stays at $155 with a call mountain at $160 and a put peak at $150.