“As of May 2022, Apple posted its 21st consecutive month of Y/Y IB share gains in China.” — Analyst Erik Woodring

From a note to clients that landed in my inbox Wednesday:

We see these same share shifts playing out through our Jiguang China smartphone installed base data, where, as of May 2022, Apple posted its 21st consecutive month of Y/Y IB share gains in China (up ~220 bps Y/Y to 22.7% share) (Exhibit 17). Conversely, Huawei lost ~120 bps, Vivo lost ~60 bps, and Oppo lost ~30 bps of share Y/Y, while Xiaomi gained ~10 bps. Additionally, Apple’s retention rate of upgraders in China increased 70 bps M/M to 73%, while Huawei-to-Apple switching rates increased 90 bps M/M to 24.6%, showing Apple continues to gain switchers from Huawei. Net, these strong May iPhone results help make up for the weakness in April and reflect the fact that Apple is the most sought after premium smartphone brand in China. 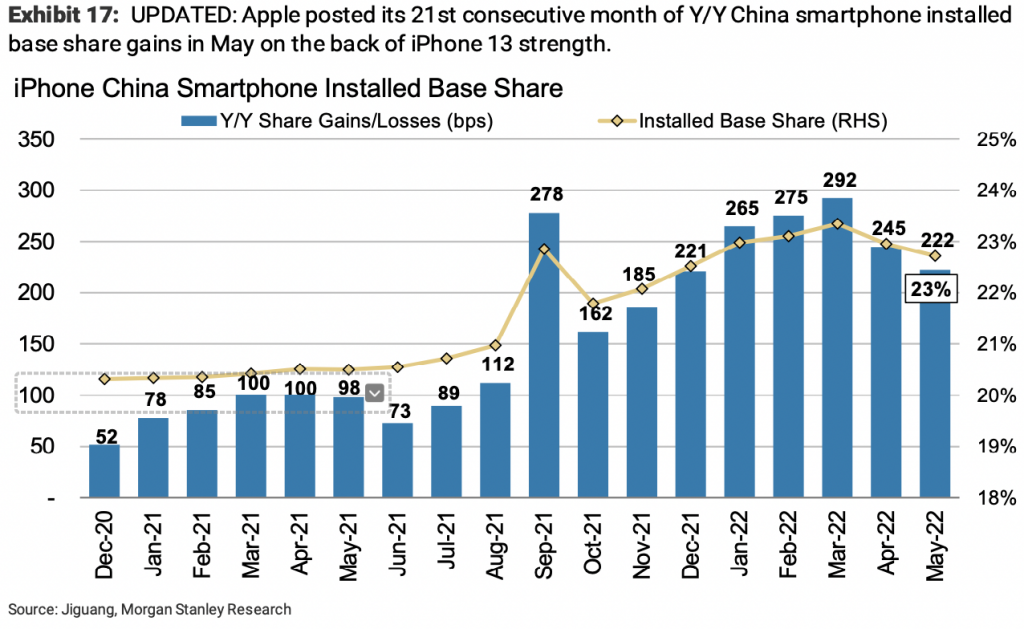 My take: Apparently I missed the announcement that Katy Huberty has moved into a management role. According to Morgan Stanley, “she is still involved with Apple coverage as it transitions over to Erik.”