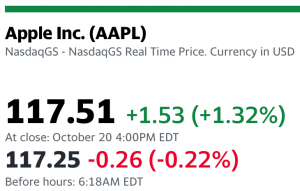 U.S. stock futures drifted higher Wednesday as investors assessed prospects for a fresh stimulus bill and the health of major American businesses for cues on the economic outlook.

Futures tied to the S&P 500 wavered between gains and losses, suggesting the broad index could face another day of choppy trading. The S&P 500 added 0.47% Tuesday on optimism that Congress would reach an agreement on a spending package.

Democratic negotiators and the White House said they would press ahead with talks on the next coronavirus-relief package, setting aside a Tuesday deadline proposed by House Speaker Nancy Pelosi to hammer out the accord. Mrs. Pelosi signaled there was progress after her conversation with Treasury Secretary Steven Mnuchin.

The two sides didn’t decisively establish whether a deal will be possible before Election Day, though White House chief of staff Mark Meadows said Mrs. Pelosi and the administration are trying to secure an agreement before the weekend. Any deal is likely to face deep opposition from Senate Republicans, especially if the proposed spending package approaches $2 trillion.

“What we are seeing at the moment is the market trading on these headlines, but to us, a pre-election stimulus deal seems unlikely,” said Seema Shah, chief strategist at Principal Global Investors. “We can hear as much as we want from Pelosi and Mnuchin about progressing talks, but some senators have said simply that they won’t support any package.”

My take: Ain't going to happen before the election.