After 6 quarters of decline, Apple grew 40% in China

And it did it without the iPhone X.

Apple finally bounced back in China

Apple’s declining streak in China has come to an end, as shipments grew 40% from 8 million in Q3 2016 to about 11 million this quarter. This makes it Apple’s best performance in China in the last eight quarters, where its growth has slowed considerably since the launch of the iPhone 6S. The mix of the iPhone 8 series at launch is also higher than the corresponding mix of the iPhone 7 series at launch last year. However, despite launching three new devices this year, Apple’s success in China could be short-lived.

“Apple’s growth this quarter is only temporary. The high sell-in caters to the pent-up demand of iPhone upgraders in the absence of the iPhone X. Price cuts on earlier models after announcing the iPhone 8 have also helped. However, Apple is unlikely to sustain this growth in Q4,” said Canalys Research Analyst Mo Jia.

Despite being touted as widely expensive, excitement for the launch of the iPhone X is building in China. “While the iPhone X launches this week, its pricing structure and supply are inhibiting. The iPhone X will enjoy a healthy grey market status, but its popularity is unlikely to help Apple in the short term.” added Jia.

My take: I call BS on the “short lived” bit. I’ve got three reports in hand suggesting that iPhone X demand in China is strong: 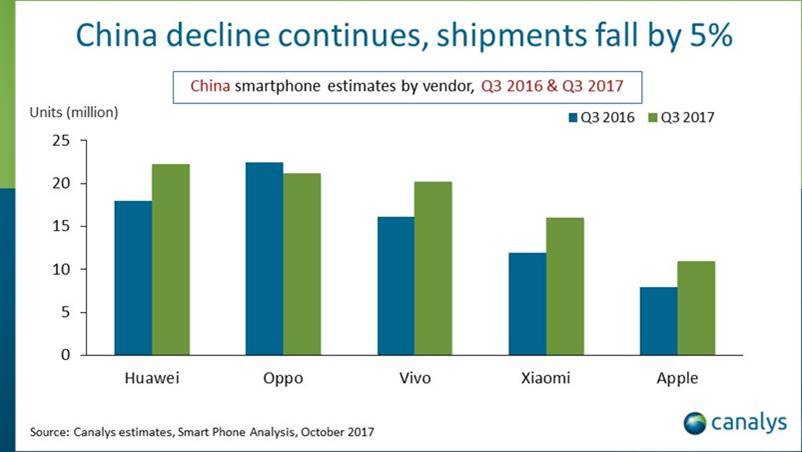