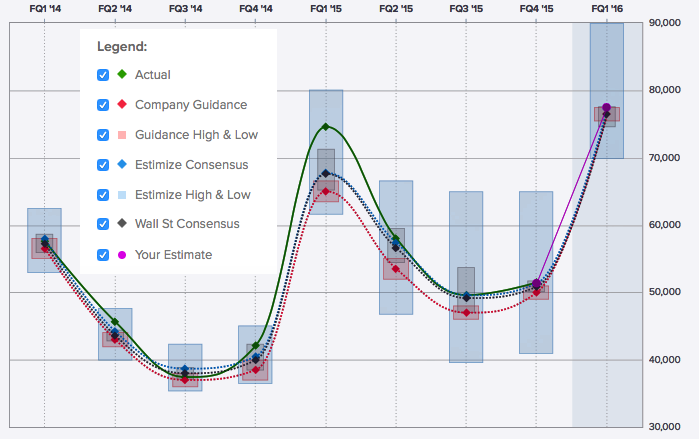 Those numbers represent the consensus, as of this morning, among a pool of 392 Apple watchers at Estimize.com—a pool that could grow to 2,000 by next Tuesday, when the actual results are scheduled to be released.

"That's the best and most representative consensus you will ever get," says Leigh Drogen, who founded Estimize four years ago on the theory that when it comes predicting a company's performance, the wisdom is in the crowds.

The business of estimating earnings has come a long way in the eight years since since I posted my first Apple 2.0 Earnings Smackdown, pitting a handful of plugged-in amateurs against eight professional analysts.

Thomson Reuters [fortune-stock symbol="tri"], which collects estimates from 39 Apple sell-side analysts, is still the gold standard. Its consensus numbers are the ones used to determine, for example, a stock's forward PE ratio.*

But Estimize is giving Thomson Reuters a run for its money. Its pool of buy-side, sell-side, independent, and armchair analysts has grown to 16,000, giving it a body of actionable data it can sell for a price.

For $500 per month a hedge fund can buy a “screener” that lets its analysts spot, for instance, the stocks with ​the widest gap between Estimize’s consensus and Wall Street’s. For $10,000 per month a fund can plug Estimize's live feed directly into its trading models. Among the buy-side clients that have purchased Drogen's live feed—and whose analysts are feeding estimates back into his model—is Point72, the notorious fund formerly known as the SAC Capital. (See Inside the Biggest Insider Trading Case in American History.)

Among the 1,900 stocks Estimize tracks, none draws as much attention—or as many estimates—as Apple ($aapl).

"Apple is an interesting case because people can so readily understand the components that go into its revenue and margins," says Drogen. "Everybody wants to believe they have a reason to be more accurate than the sell side. Everybody wants to be the one that got it right."

The most accurate Apple estimates last quarter were submitted to Estimize by a trader called Analyst_4656738 who, like most of the site's participants, prefers to remain anonymous.

Over the the next few days, we'll be running our own competition, as usual, leading up to our quarterly post-earnings ranking of the best and worst Apple analysts.

Unlike Estimize, we'll be naming names. Above: Apple's past and future EPS, per Estimize.

*Thomson Reuters' consensus this morning—earnings of $3.23 on sales of $76.66 billion—is a bit lower than Estimize's.